On the first game of the season, the Visitors, Sutton won the toss and elected to field.

Graeme (98) and Rig (61) opened for Milton and put on one of the strongest opening partnerships in recent years of 156.

After the players tucked into the first tea of the season it was time to take to the field. Adnan opened up and kept it tight early on, whilst Chris replaced Jimmy and started with a wicket maiden (and finished with 10-2-44-1)

Martin (10-2-43-2) came into the attack and helped keep it tight in the middle overs whilst picking up a couple of wickets. With Sutton building a strong chase, the ball was thrown to Hitesh (1 for 40) and Adnan (3 for 56) to finish up and Milton managed to hold onto the win by 26 runs, largely due to a strong fielding display by the whole team.

No man of the match awarded this time, a very good start to the season so one for the team to share.

2nds Away vs Abington 3rds

Under surprisingly sunny skies, Milton’s Second XI began their campaign against a determined Abington side keen to open their account with a win at home.

Milton won the Toss and decided to make Abington bat first and made early progress against an attack still shaking the winter cold out of their system. Likewise, the Milton fielders found it hard to warm to their task in the sunny yet cool conditions. Once into gear, however, Bharath Rudraraju (1/21) tied down the Abington openers and was rewarded with a wicket. Bharath was also rewarded in the field, taking a fine catch at mid-off.

Frustratingly, the Abington line up then eluded the field with many slashes and nicks flying just out of reach. Abington went to drinks with a sound platform at 2 – 74. After drinks Puneet Singh (2/42) produced a gutsy bowling spell which broke the Abington middle order and slowed the scoring rate. He was supported by James Reid, Maltesh Kulkarni and Mahanth Gouda (2/29) who chipped in with two timely wickets.

The fielding improved as well with the Milton men on their toes and ready to pounce. Alex Day made some fine saves in gully while Rizwan chased hard in the outfield all day. Bumble had a tough wicket keeping debut on an uneven pitch and is still wringing his hands after copping several tough takes. Peter Stoher shared the keeping duties with the wounded Bumble and turned back the clock to use the gloves with the adroitness of Alan Knott.

The combined effort with the ball and in the field after drinks restricted the Abington target to 144.

Bob Newton (18) and Peter Stoher (22) looked set to eclipse their combined ages with runs due to some lovely shot making and a little help from a wayward attack filling the wides column in the scorebook. Their 60 run partnership set up a likely victory.

New Aussie recruit Jason Sepetauc (30) scratched out some streaky runs before holing out, as did an unlucky Maltesh (8). When Mahanath (1) was bowled after getting bogged down under scoreboard pressure things looked grim.

At 5 -111, however, Puneet (36no) came to the fore again as he did with the ball. Crisply struck shots eased Milton home for a resounding win.

A special mention to Alex, James and Rizwan who toiled away in the field after heeding late calls ups into the XI.

Next week we expect bigger and better from the tenacious twos! 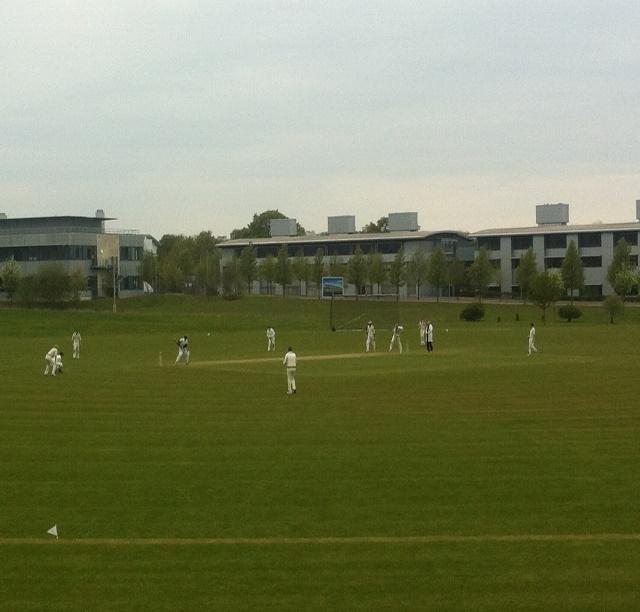 Report from A Peck The 3rds lost the toss and were put in to bat. A Peck and coulson opened. Peck smashed 14 off the first over but soon went for 17. His replacement Ian Coston, went on to top score with 38 in  Which he was helped by Kiwi Keeper Kelly to a 50 partnership. Innings finished 162-9 Milton’s two opening bowlers were an ever pacey Callum Flintoff and debutant Piers Barton. Callum took an early wicket on a uneven pitch whilst Piers went for 18 of 3 overs and was replaced by a young debutant in Sam Jones aged 14. Sam and Stretch went on take 3 wickets each, Sam ending with 6-2-12-3. Phil and Callum also took  2 each, bowling St Ives out for 126. Man and Woman of the match go to Sam and Kelly – Sam for this first senior game with some impressive bowling figures and Kellu  for her dedication to the cause resulting in many bruises (10 in total)